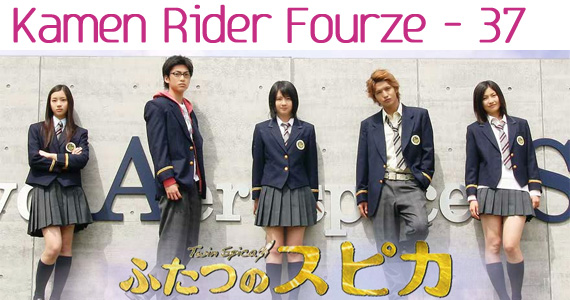 At the behest of distrowizard Drazic (it’s a prestige class) I’m using this as the release pic. I had something lined up already, but I’ll relegate that to ep 38, knowing that you’ll all be waiting for it with baited breath.

Well, my horoscope finally comes up this ep. Not sure how to feel about it. I’ll guess I’ll save any thoughts of comparison for when the arc is over, and instead tell you all to enjoy the fuck out of the ep. <3

Plenty of notes after the jump, though they come complete with many spoilers (including a note for ep 36 which I didn’t want to put in the post for it because I didn’t want to ruin the moment if anyone saw it accidentally. :V)

Alright, let’s dive right in. The note for ep 36 deals with JK’s real name – Jingu Kaizou. This was, IMO, a really nice and touching moment, and as the TokyoTosho and Nyaa posts – as well as general internet links – drop people onto the full release post (and there was nothing else to discuss in the ep, really) there was a real chance people would see it there and get spoiled. So, here goes.

All of the main character names in Fourze are references to the original Kamen Riders. For example, “Nozama” is “Amazon” backwards, or Kazashiro Miu is an anagram of “Kazami Shirou”, the human name of V3. JK’s name is based off “Jin Keisuke”, the human name of Kamen Rider X. JK’s real name – Jingu Kaizou, is also a reference to this. Kamen Rider X was a ‘kaizorg’ – a combination of ‘kaizou’ meaning ‘modified’, and ‘cyborg’. Hence, Kaizorg Jin, written in Japanese as ‘Kaizougu Jin’, anagrams to ‘Jingu Kaizou’, giving us the real name of our favourite definitely-not-homosexual fabulous info dealer.

And with that out the way, this episode’s notes.

First of all, let’s jump straight into Erin. Erin’s name follows the pattern of all the Horoscopes thusfar in containing a veiled reference to what constellation she represents. In this case, her name – Erin Suda – is an anagram of ‘Eridanus’, a constellation modelled after a river. Which is Aquarius-y enough, except the river’s waters are also, in mythology, born of Aquarius. As such, I was really adamant about preserving the spelling ‘Erin’ even though it doesn’t quite match the Japanese pronounciation. This is because Japanese letters (with the exception of ‘n’) all have to end in vowels – so Eridanus becomes “Eridanusu” – the second ‘u’ being shoved onto her first name to make it pronounced ‘Erinu’. This linguistic desync makes spellings like ‘Eline’ or ‘Eileen’ seem a lot more accurate in terms of pronounciation, but at the cost of shirking away from the actual point of the name, IMO.

Many thanks to takenoko over at T-N, actually, for pointing that one out to me. I’d probably have missed it otherwise, and I feel bad that he pointed it out to me and then I get to make the post about it first. V:

Erin’s other gimmick is that, being half-foreigner, her grasp of Japanese isn’t quite perfect. This leads to some accidental wordplays that have me digging up the parts of my brain I’d locked away for my own good after Kijima – and I’d mercifully already had to reawaken for Smile this week. As ever, I’ve tried to preserve the pun aspects while keeping meanings fairly true to the actual point of the original Japanese, but apart from the first one the emphasis is more on preserving what she meant to say, with the mistake purely being for humor purposes.

So, her first one, which I translated as “love me”/”leave me” involves the Japanese words ‘chuu’ and ‘chuui’. Chuu means to kiss – so she’s just turning to Gentarou and saying “kiss me!” Eventually it’s revealed that what she meant was ‘chuui’, which means “warn me”. As in, “warn me before you sneak up on me like that when i’m randomly punching the air around me.” Changing this to essentially being ‘leave me alone’ makes her seem a bit more confrontational – which is an unfortunate part of the joke not quite working literally – but I can instead smooth that over a bit by explaining it was for Gentarou’s own good, so it’s the old mentality of just shifting the explanatory tone onto the part of the dialogue that wasn’t the joke to allow the joke to still work. Localization, ho!

The next one up to bat is pretty simple – “dachi”, meaning friend (or ‘bro’ as I sometimes use when Gentarou’s talking about dudefriends) is confused for ‘dani’, meaning a tick or mite. While this might be like a “hurr hurr she called yuuki an insulting thing by accident” situation, the line doesn’t really indicate that this is being taken as anything more than another homonym mistake, so i just went for friend vs ‘frond’.

And finally, Erin as Aquarius describes herself as ‘kanzen fuketsu’. This is a mutilation of the phrase “kanzen muketsu”, meaning “totally unmatched.” ‘fuketsu’, however, means dirty or unclean. In this case, the idea that she was calling herself something derogatory by accident was more critical to the line, and the idea I had was to retain ‘dirty’ but try and have her compare herself to a ‘deity’. If I’d chosen to go for something a bit more liberal with the ‘fuketsu’ I probably could have made the thing a little more fluid, but when you’re trying to juggle changing both ideas and still retain a homonym, ideas kind of don’t flow to me. Knowing my luck someone will post in the comments with a brilliant idea that’ll make me go “Damn, if only I’d thought of that” but, such is life.

And I think that’s our lot. Enjoy!