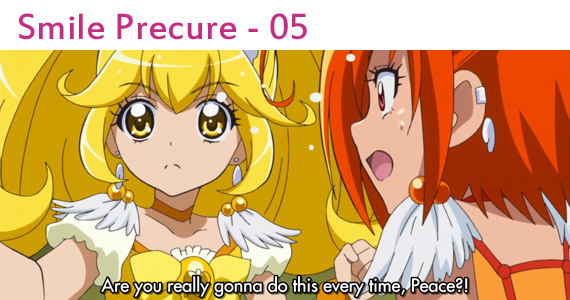 An exciting adventure in which four girls suddenly act like babbling retards so the new one can come in and save the day having had literally no character development!

TL notes after the break, and I might rant about comparing this to PC5 or something, we’ll see.

First, our new villain commander. Much as with translating the ‘aka’ in Akaoni’s name, I felt it was only fair to translate the ‘majo’ in Majolina’s name. So, Witchylina it is. Does that sound stupid? Good, because it sounds even stupider in Japanese, and one would be loathe to spare you all from such agony. <3

Miyuki refers to Reika as a “mizu no yousei.” Yousei is the same word used for ‘fairy’ in terms of all the Precure mascots, but the word has a much more vast meaning in Japanese than fairy has in English, which implies diminuativenessnessness. I went for “water spirit” as I felt that’d be the best way of handling it but I’m not entirely happy with that? I feel like there’s an obvious word just lingering somewhere out of my reach, and such annoys me even though it’ll probably never come up again.

During class, we see Reika reading from the famous piece of Japanese literature Tsurezuregusa. This is such a stock piece of Japanese literature that I was able to just go back to my script for HeartCatch 7 and pull my original translation right out of it, because they always just use the opening 2-3 lines to make it recognizable for the kiddies. Took more time to google which HC episode it was in than it would have to just write a new translation, but I am nothing if not a stickler for consistency.

I referred to a pretty old, pre-1900 translation of Snow White I happened to have lying around in an old book of my grandmother’s for writing the Snow White rendition in this ep – in terms of the metaphors used, and blatantly just cribbing the dialogue for the mirror – because hey, it’s iconic and it rhymes so well I wouldn’t wanna screw with it anyway. I do have an affinity for the overly poetic and using something that old kind of tingles my literary senses in a way I quite enjoy.

And that’s the TL notes. So, uh, next up. Let’s talk about Karen.

It’s kind of inevitable that Smile is going to be compared to Precure 5 – the team layout, thematics and ordering is basically the same, and even the character archetypes are falling very much into place, with supposed “banchou” March actually being a very intelligent well-spoken character like Komachi. Drawing conclusions between the two shows is hence, while something I do not normally find myself doing, kind of inevitable to me with the affection I have for Precure 5 as a show.

It becomes stark here, in this ep, how little Smile is actually doing at this point compared to PC5. Each ep of PC5 built on the last – gradually establishing the characters of the initial 4, and then giving Karen a bumper double ep to make up for the characterization she hadn’t had a chance to get. For example, we see a lot of Komachi in library scenes, whereas Nao may as well not have existed until her ep. We get to see from very early on how strong and binding Nozomi is as a leader, what she inspires in people despite her own deficiencies, whereas Miyuki is nice enough but you never really get the sense there’s any inspirational substance to her – certainly she can lead and suggest things, but one hardly gets the sense that people go along with it because of her natural charisma.

The other thing I want to talk about is negative development. So far, we basically see the Smile cures as near perfect – the team needs a Cure with [x] attribute, this character has it, so they deliver it. Each time, the existing team is shown to be completely ineffective all of a sudden for the most stupid reasons – this episode really hammering it home with Nao just completely dropping character to nonsensically mess up in the Akanbe fight – so the new member can shine, but you never feel it’s because the characters aren’t strong enough to have handled it, or have some kind of problem they need to overcome, the writing is just demanding they be weak, and that’s it.

The only negative development we’ve had in Smile is Yayoi’s ep, which to be honest is painting her deficiencies as positive moe character traits more than it is as something that’s actually going to hold her back, and a throwaway comment from Miyuki early on about how she’s a bit of a klutz. Admittedly, PC5 didn’t hammer this point home much either… up until this point. The development of the team had reached the point that they could finally showcase their weak link – Karen was a mess, internally, struggling to cope with the pressures placed upon her but feeling she had to take on more and more responsibility. And bam, when time come to get her powers, they rejected her, because she wanted them for all the wrong reasons.

I remember being genuinely shocked by that, and it’s that kind of writing that I find it inevitable to compare Smile to. When I’ve made this point on IRC, the response has basically been that Smile has essentially had five “episode one”s in a row, and that the development is yet to come. But if that is the case, what’s the point of this last month of episodes? You might as well flash forward and say “so these guys are a team now, and these are their rough personality archetypes” and nothing would be lost. That Smile is taking a different, belated approach to making it’s characters endearing does not in any way justify, in my opinion, the vapid nature of the episodes we’ve had so far – which have become increasingly stark in how contrived their writing is as they’ve had to take more and more extreme approaches to justify the addition of a new member.

That’s not to say the episode’s concept is bad, but it feels like a slap in the face when it’s meant to be establishing a character, and all we learn about her is… she’s very polite. That’s essentially all that sets her apart, her bizarre formal speech and that she tries to help people a lot. There’s nothing compelling about any of these characters yet, and while Akane and Nao are certainly “cool”, one struggles to find anything that truly sets them apart at this stage.

That’s not to say I don’t have hopes for the show, and I expect it to improve once we get out of this intro funk. I just wish we’d had some episodes that actually established something meaningful other than “Reika joined the party!”