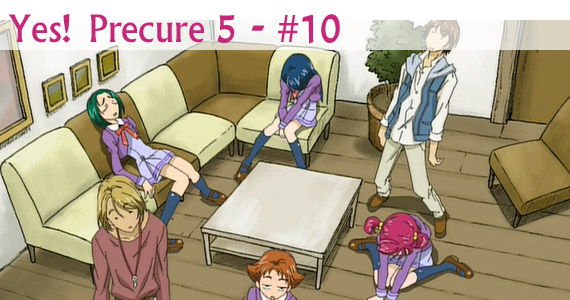 Even they're fed up of waiting.

MP4: DDL | Torrent
MKV: DDL | Torrent
Thanks to the lovely CureGecko for the DDLs, and as ever with our Precure releases, you can also download them from the [Precure]AllStars bot on either #precure or #news on irc.rizon.net.

Hello again! It’s PC5 time where we fling out another episode that’s already been subbed so we can tease you with the fact there’ll be no new stuff for ages. ( ﾟ∀ﾟ)ｱﾊﾊ八八ﾉヽﾉヽﾉヽﾉ ＼ / ＼/ ＼

Just kidding. Perhaps. Anyway, in this episode, Mika is more gay for nuts than ever before, Gamao reminds us he actually exists and Coco… I dunno what Coco’s doing but it made for a pretty amusing splash.

Translatey stuff after the break.

Let’s discuss Gamao this episode. I don’t think I mentioned it before back on T-N’s forums, but Gamao’s name is taken from one of the many colloquial names for the Japanese Common Toad, which is called a ‘Gama’ or ‘Gamagaeru’ (where Gaeru just means ‘toad’ :V) This is in the same way Girinma’s name is derived from the Japanese name for the praying mantis (Kamakiri) mixed with the English ‘mantis’ to provide the ‘ma’ and ‘n’ kana. Arachnea’s name derives from the Latin root for spider which provides words such as ‘arachnid’ and ‘arachnaphobia’ etc.

Speaking of Gamao, it has been ages since he showed up, hasn’t it? Precure 5 episode 3 was pretty much the first episode of anything I ever translated, and I perhaps went a bit crazy with giving Gamao such a ludicrous manner of talking in the subs. It is kind of endearing to me though and perhaps makes me hate him less than I should, so on that basis I don’t consider it a mistake. It just shocked me how OTT I was back then with these things I guess. XD

I must say I heartily laughed at Karen saying they should solicit the press – using the word ‘masscomi’ again – and then cutting to Masuko Mika. It’s nice that they make such blatantly obvious word puns and then continually ram the fact they made a bad pun down your throat.

Also, spare a thought this Christmas for dear Lobster, our under-appreciated sexpot of timing. Having four girls valley-girling all over the place for like a solid minute in that corridor scene is every timer’s nightmare. Give him a hug this Christmas and tell him you love him <3