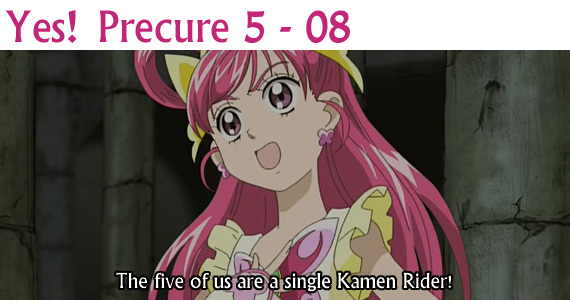 Komachi: I have researched everything about our current enemy and this form of Precure.

MP4: DDL | Torrent
MKV: DDL | Torrent
Don’t forget this and all our other episodes can be downloaded from the [Precure]AllStars bot over at #precure on irc.curecom.net or #news on irc.rizon.net thanks to our lovely Rika-chama, ruler of bots. And extra special thanks to the lovely maryadavies and the much-maligned-Mac fetishist CureGecko for our DDLs. <3

Now then, wow then, it’s Precure 5! Hooray! It’s fun times for all! Enjoy our beautiful new DVD-quality source in 480p, and now we’re not tied to the XVID REGIME it’s even in delicious h264 for your viewing enjoyment. Sexy!

In this episode, I manage to fuck up naming the files so they have slightly different formats and then balls up the TT descriptions too. It’s great, I am apparently asleep today and should not be allowed to live.

The mp4 version is everything you’d expect from us – lots of flashy typesetting and karaoke, hardsub, splash, drop it on your 360/PS3 and enjoy sexiness. The mkv version is more in-line with standard fansubbing practice – totally softsubbed, no effects, one-font-for-everything, and in anamorphic format – which means we can deliver pretty damn sexy video quality at a very low filesize. Most players SHOULD have no problem with this script, however there’s the brief possibility that some of the libass-based players might choke on a few things because I’m not entirely yet used to what I can ‘get away with’ on mkv without buggering anything up. If you have any issues, let us know and we’ll see what we can do. No promises for a v2 but at least a fixed script.

Anyway, TL note-esque stuff after the jump as ever. <3

Well hi there, how are you? I’m lovely. Moreso than usual, I mean. Mwa~!

First of all, let’s talk about Nuts. Get your head out the gutter! We mean of course our furry friend. You may have seen from the various signs dotting the episode that the official spelling of his name is “Natts”, so I’d like to take a moment to both explain this and explain why it’s really stupid.

Obviously, Nuts name derives from ‘coconuts’, being as he is paired with the lovely Coco. Japanese being a phonetic language, however, the letter ‘u’ is pronounced more like the ‘o’ in ‘nook’. Hence, ‘Nuts’ is written in Japanese with an a as “Nattsu”. This is how the official spelling becomes ‘Natts’ – because their romanizers have no clue what the hell they’re doing. The matter is further made worse by his human name being simply “Natsu” – meaning “summer”. The pun works in Japanese – and phonetically – but not in written English.

On a side, “let’s laugh at the dumb translator” note, this ep confused me a little at first. Bellflowers are “kikyou”s – which Rin refers to as “kikyou no hana” – literally bellflower flowers. This at first led me to mishear and interpret it using another meaning of ‘kikyou’ – “unusual”. Hence “Those are some unusual flowers you have there, Minazuki-sempai.” etc etc. It was only when kikyous were referred to as a standalone noun I realized the mistake I’d made. THE MORE YOU KNOW.

Arachnea’s line about them being a motley bunch is the Japanese word ‘yoseatsume’, which literally means a group of people brought together from seperate sources, generally to fulfill a particular purpose, that don’t actually really know each other that well and aren’t actually connected. It’s a nuance that’s hard to convert to English, but the important thing is that she’s trying to accuse them of being strangers to each other. What is hilarious is that she is almost entirely right. Hooray, villainy!

Also, upscaling effects from 396 to 480p is worse than actually making new effects. I tried and Lobster had to verily slap me and go “ur doin it rong.” I have much to learn, alas. ;.;