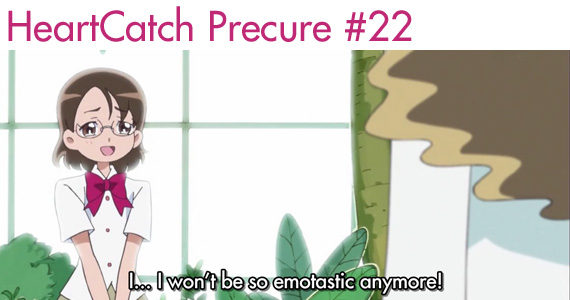 Sometimes my editor comes up with fantastic suggestions I just can't use. It's very saddening.

Thanks to resident DDLstress maryadavies, as ever. My powers of releasing when she’s away and being asleep when she posts the DDLs are unparalleled. Also don’t forget this and all our other episodes can be downloaded from the [Precure]AllStars bot over at #precure on irc.curecom.net (or #news on irc.rizon.net thank you very much Rika ;o)

I guess we said we’d get this out on Thursday, and it is kinda Thursday in Europe. I guess for everyone else it’s early though? Hooray for early. Ep 23 should follow behind fairly soon this weekend, not that it matters as nothing important happens in that episode anyway.

Translatey stuff after I get a chance to write it.

Name meanings. Pretty boring one this week. Mizushima is a fairly standard Japanese surname that just means ‘water island’. Like an island within a lake?! What could this mean?! Probably nothing, don’t fret over it. Aya’s name most likely derives from the adjective ‘ayashii’. This generally means suspicious or untrustworthy, but when used to describe someone’s handiwork it means ‘clumsy’ or ‘butterfingered’. This seems to fit Aya down to a tee, so I think it’s rather clever.

Also, am I the only one who directly remembers Tsubomi stating to Erika when joining the Fashion Club that she would have to “share her with the Gardening Club”? It seems like either bad continuity on the part of the writers or Erika is just really goddamn stupid. Probably the latter, actually.

The term “green-handed” in this episode appears to be Japan bastardizing the English phrease “green-fingered” to meet their own Engrishy ends. To make things more confusing is the equally valid “green thumb” in English, used to describe the person rather than the skill. We decided to just turn the Engrish “green hand” into “green-handed” and figured that’d be the most neutral way to do it. Also, it’d be weird to have the actors going GURIIN HANDO while the subs have “finger” or “thumb” or whatever. Also, green curtain is a fucking stupid term.

And finally, the phrase Tsubomi uses for ‘adversity builds character’ literally means “after the storm, the ground hardens”. It’s a very clever reference to the fact it was just raining, you see, but also pointing out that the water soggifies the ground and it hardens up again as it evaporates or is absorbed by the earth, much like how people become stronger after going through tough times. It’s very clever, cause it’s about gardening and stuff. Really. It’s goddamn genius.